Oprah Winfrey’s Half Sister Revealed On Her Show 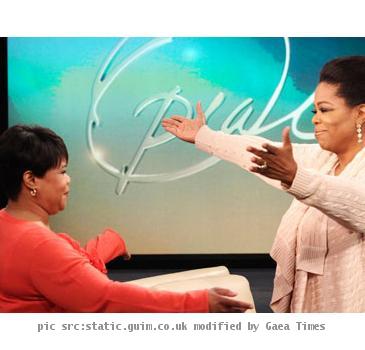 LOS ANGELES (GaeaTimes.com)- Talk show queen Oprah Winfrey divulged one of her family secrets on her show on Monday night, to the utter delight of all her fans. The highly-acclaimed chat show host surprised all her viewers last night when she revealed that she has a half sister, Patricia who her mother Vernita Lee had given up for adoption soon after her birth way back in the year 1963. Although Patricia’s last name was not divulged on the show, Oprah Winfrey affirmed that she is her half sister who she did not even knew existed until last year.

In the promotional trailer that was release before last night’s episode was aired, Oprah Winfrey stated that she was “literally shaken to the core” when she got to know that she had a half sister. The talk show empress further went on to add that in the last 25 years, her show have been instrumental in reuniting many families together, owing to which she thought that she had definitely seen it all. However, Oprah Winfrey described last night’s show as the ‘the miracle of all miracles’ as she unveiled to the world her own half sister.

Although Patricia found out two years earlier that the chat show queen was her half sister, Oprah Winfrey got to know about the fact just last year while the two meet for the very first time at their mother’s home on Thanksgiving Day last year. The talk show presenter’s sister was born in 1963 in Wisconsin when Oprah Winfrey was eight years of age and lived with her father in Tennessee.

CHICAGO (GaeaTimes.com)- The highly anticipated of 'Oprah' episode is here and this year it ...
Copyright© 2011 The Gaea Times