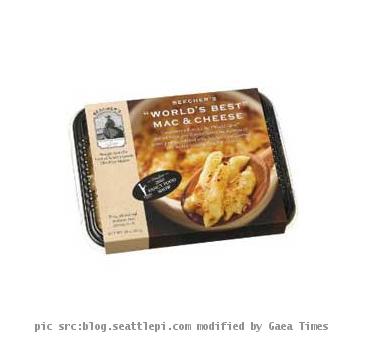 SEATTLE (GaeaTimes.com)- It is quite well known that a product which gets the endorsement of talk show queen Oprah Winfrey is sure to become the talk of the town and its maker also wins a ride to fame! Hence, a Seattle based chef who was not known to many people until a few days back gained fame after his Mac and Cheese was featured in the talk show of Oprah Winfrey. The special episode which was titled ‘Oprah’s Ultimate Favorite Things’ was special as the name suggests, it displayed and dealt with the favorite things of Oprah Winfrey. Chef Kurt Beecher Dammeier was lucky as the Mac and cheese made by him was selected by the talk show queen. The news came to him as a pleasant surprise and he later told his customers about this boon that came his way unexpectedly. The elated chef even offered his Mac and Cheese to the customers at his outlet for free after learning the news. The chef started selling the now famous Beecher’s Handmade Cheese in the year 2006.

The Seattle based chef has not been able to figure out how the talk show queen got to know about his cheese. As far as he can remember she never came to his outlet. Six weeks back, he received a call from the team of Oprah Winfrey and was delighted to know the Beecher’s Mac and Cheese was selected for the show. Later, he admitted that he became nervous after getting the call. He was instructed by the Oprah team to maintain silence about the incident.

The Beecher’s Mac And cheese is a special variety of cheese. It needs to be preserved for one year and a half months before use.