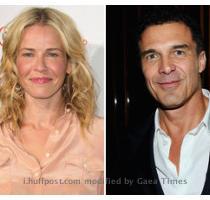 LOS ANGELES (GaeaTimes.com)- Hotelier Andre Balazs seems to have found his new love in late night television show hostess Chelsea Handler. Yes the two recently were spotted at various places where they grabbed the public attention not only for their joint appearance but for having indulged in some extreme mushy session! The two were seen getting cozy at the after-party of the Florence + the Machine concert.

Both Andre Balazs and Chelsea Handler were spotted together at the Sundance film festival in Utah in Saturday. Eyewitnesses who spotted the couple divulged that the two appeared to be extremely giddy. The pair infact not only got too close with each other, reportedly they even made love at the Bing Bar! Yes party animals who saw the duo that night said that the two just could not have enough of each other. The two engaged in a continuous kissing and caressing session. A little birdie present at the venue said that Chelsea Handler and Andre Balazs just could not resist themselves from kissing each other’s lips, neck, holding each others hands and from doing every possible thing. Now all this are enough to spark up that there is something between the two of them. Chelsea Handler held her arms around Andre Balazs’ torso and took him to the barricade where he followed her willingly. The duo then left the place around 3:00 am.

Andre Balazs previously dated Hollywood star Uma Thurman and Katherine Keating, daughter of former Australian Prime Minister Paul Keating. On the other hand Chelsea Handler too was recently linked up with rapper 50 Cent. She even tweeted a picture of hers with the rapper in bed last month, but strikingly both of them have denied the reports.

Peter Andre down with mystery illness

LONDON - Singer Peter Andre has been struck by a mystery illness. The "Mysterious Girl" hitmake...

Manhunt on for murderers of Indian-origin woman in South Africa

CAPETOWN - A manhunt has been launched for the men who killed a newlywed Indian-origin woman, ...

WASHINGTON - A conservative advocacy group has urged the US Justice Department to investigate a wee...
Copyright© 2011 The Gaea Times