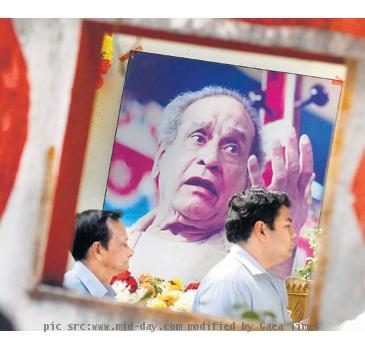 PUNE, INDIA (GaeaTimes.com)- Music lovers from all across the city who have been mourning the demise of legendary classical singer Bhimsen Joshi turned up to pay their last respects to the stalwart musician during his funeral on Monday evening. The Bharat Ratna winner, who had enthralled music-lovers from years now with his mesmerizing rendition, passed away at a Pune hospital after prolonged illness. The news of the music-maestro’s death had sent shock waves across the music fraternity of the nation with all his ardent followers making a beeline at Bhimsen Joshi’s ‘Kalashree’ residence in Pune after news of his unfortunate demise spread.

Bhimsen Joshi’s funeral was held on Monday evening with full state honors with a number of noted dignitaries gracing the event in a bid to pay homage to the musical icon. Early on Monday morning, the mortal remains of the music maestro were kept at his Pune residence for people to pay floral tributes to the classical singer who ruled the hearts with his musical prowess for decades now. Later, his body was taken to the Vaikunth Crematorium with full respect and his last rites were carried out by the musician’s eldest son, Raghavendra Joshi. Various senior political leaders also attended the funeral of the legendary musician.

Bhimsen Joshi left for the heavenly abode on Monday morning at Pune’s Sahyadri Super Speciality Hospital after confronting multiple organ failure and a host of other ailments. The music maestro was admitted to the medical facility about three weeks ago due to his worsening health condition before his health deteriorating further leading to his unfortunate demise.

KATHMANDU - A 30-year-old from the Marwari community, the clan with the Midas touch in both India an...

NEW DELHI - Indian classical music legends, their moods and their legacies can unfold as intensely o...

NANDED - Maharashtra will recommend that the central government confer the Bharat Ratna, the cou...