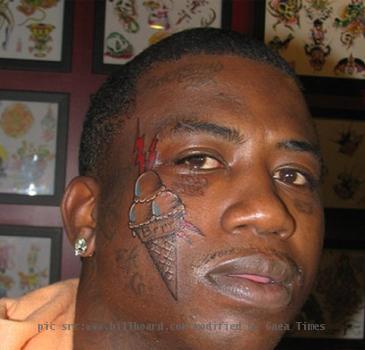 LOS ANGELES (GaeaTimes.com)- Is the cold weather really a reason for people to chill out? If you think it is not, then think again. The latest celebrity to have himself chilled out in the latest fashion is rapper Gucci Mane. The rapper considers himself as cool as an ice-cream. The tattoo that Gucci Mane has got on his face depicts a cone with three scoops on it, along with the word “Brrr”. The Internet has been flooded with the pictures of the rapper with his tattoo. This has surprised a number of people who are confused as to why the rapper did this to his face.

Gucci Mane had been recently admitted to a psychiatric treatment center due to some “mental incompetency.” However, he was released from there after a brief stay. The rapper had this ice-cream cone tattooed on to his face on Wednesday and the pictures are now available all over the web. The cone that the rapper is flaunting, is seen to have three scoops and the word “Brrr” along with some several red colored lightning bolts. What is actually meant by this ice-cream tattoo is not very clear. Going by the reports of Kali Bowyer, a spokesperson of the rapper, the ice-cream tattoo is an indication of how he chooses to live his life. Gucci Mane wants his fans to believe that he wishes to live a chilled out life. Apart from this, the ice cream cone design of the tattoo also defines a medallion, which the rapper had worn for a good number of years. Some of his previous pictures show him wearing it.

Whether this new ice-cream tattoo would prove to be lucky for Gucci Mane in taking a positive move in his career is a matter of question. Why he was released from the psychiatric treatment, or what was his probation status is not very clear. However, the rapper had been involved in legal problems since 2001. Will this tattoo of his bring him out of his legal problems? Time will tell.

Sex is a business opportunity for some Chinese college students

LOS ANGELES - Chinese college students are considering sex as a business opportunity to lead a glitt...

LONDON - It's an early beginning for Jennifer Lopez's twins into the showbiz business - Max and Emme...

LOS ANGELES (GaeaTimes.com)- The two kids of pop diva Jennifer Lopez has made their modeling deb...

NEW DELHI - Call it first day's fatigue or avoiding exertion for the next day, players at the Common...

Rap superstar JAY-Z will lead the way at the 2010 BET Hip-Hop Awards after scoring 11 nominations. ...