Kelsey Grammer’s Girlfriend To Marry Him 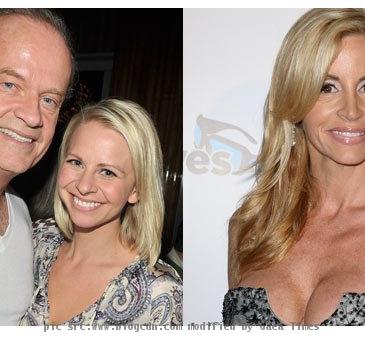 LOS ANGELES (GaeaTimes.com)- That Kelsey Grammer has a new girlfriend is no longer hidden from the prying eyes of the media. What is new is that he plans to marry his new girlfriend Kayte Walsh next month. Kelsey Grammer legally has a wife, Camille Grammer of “Real Housewives of Beverly Hills” fame. He has not divorced her as yet. On Thursday, Kelsey Grammer appeared on the show, “Late Show With David Letterman” where he revealed his plans of getting married to Kayte Walsh, this February. The actor had been dating this lady from July last year. It seems their relationship has been going steady since then. The actor told David Letterman that Kayte Walsh was his new girl and he plans to marry her very soon, most probably in February.

Kelsey Grammer, 55, has been married four times in the past. Camille Grammer, 42, is his present wife. Reports say that Kelsey Grammer has asked for a quick divorce from his wife, who on the other hand has spoken to a Los Angeles judge to reject her husband’s request of getting a divorce anytime soon. The actor told a leading magazine that he and girlfriend Kayte Walsh are marrying each other since they are engaged and their engagement is a consequence of the love they share. Kayte Walsh, 29, is a British flight attendant. In October, last year she suffered a miscarriage where she lost Kelsey Grammer’s fifth child.

According to the court papers, Kelsey Grammer wanted a quick divorce from wife Camille Grammer since he wanted to marry his girlfriend as soon as possible. However, Camille Grammer feels that the reason of getting married again is not a sufficient cause behind filing a divorce. She feels there are other reasons too. Whether or not she is correct is sure to unfold with time.

LONDON - The stars of the 'Real Housewives of Beverly Hills,' reality TV show, have spilled their co...

LONDON - A gay Saudi prince on trial in Britain was Tuesday found guilty of beating and strangling h...

WASHINGTON - Lindsay Lohan has checked into the most famous treatment-center-to-the-stars, Betty For...

You're Australia's top model! Oops, no, you're notSYDNEY — The winner of "Australia's Next Top Mod...

SYDNEY (GaeaTimes.com) -- This year the winner of Australia's Next Top Model is Amanda Ware. The...

Man drops ring off Brooklyn Bridge while proposing to girlfriend