Florence And The Machine On ‘SNL’ 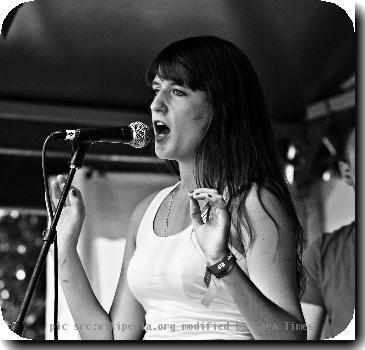 LOS ANGELES (GaeaTimes.com)- Florence and the Machine delivered another sizzling performance on the ‘Saturday Night Live’ stage. Following up on their amazing performance at the VMAs this year, the band seems to be getting better with time. They performed that chart topping hit ‘Dog Days Are Over’ and ‘You’ve Got The Love’ on the show that also featured Anne Hathaway as the special guest. The group proved yet again that their live act is one of the best in the contemporary music scene as the audience and TV critics gave rave reviews of their performance on the web.

Florence and the Machine is led by Florence Welch who is a well known singer in the UK. Before creating the alternative/indie pop/soul band, Florence Welch had also provided vocals for other famous groups such as Fatboy Slim. The group burst into the music scene in 2009 with its debut album ‘Lungs’. Since then they have been a mainstay at several award ceremonies and also bagged several awards in American as well as international award shows. A song by the group was also a part of the ‘Twilight Saga: Eclipse’ and it was played in the background when the end credits were rolling.

Apart from Florence and the Machine performing on the show, the ‘Saturday Night Live’ episode this week held some great surprises for the fans. Anne Hathaway was seen at her comic best when she played Kate Middleton in one of the segments. In another segment, she made a hilarious impression of Katie Holmes and gave that typical lop-sided smile along with strange answers.