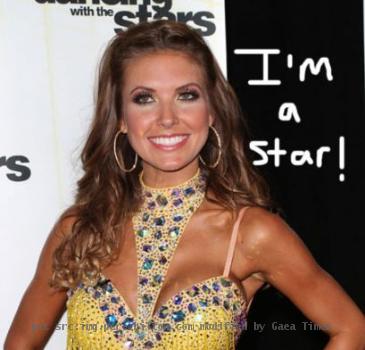 NEW YORK (GaeaTimes.com)- Despite her rather unexpected elimination from the ABC reality series “Dancing with the Stars,” it seems that television personality Audrina Patridge is on a high these days. The reality star is all set to be back on the small screen with a brand new reality show that is scheduled to be aired on VH1 and it would give her large number of fans the perfect opportunity to know more about their favorite star. The popular television star was recently in New York’s Times Square to launch ‘Just Dance 2″ for Wii and as expected the venue was buzzing with all her fans who had gathered to catch a glimpse of the reality star.

Apart from launching ‘Just Dance 2″ for Wii, Audrina Patridge also assumed the hosting responsibilities of a live-streaming dance competition using the Just Dance 2 system. It does not need to be said that the large number of audiences who were present at Times Square during the launch enjoyed themselves to the fullest as the 25-year-old reality star ensured that they have a gala time. However, all her fans who miss her dazzling dance moves on ‘DWTS’, do not need to be disappointed as soon the television star would make a comeback on the small screen with her new reality show.

While talking about the upcoming show on VH1, Audrina Patridge revealed that the forthcoming series would not be based on a particular set-up and it would showcase her life as it is. At the same time, the reality star also mentions that the viewers can expect something absolutely different than the MTV reality series “The Hills” which shot her to instant fame.