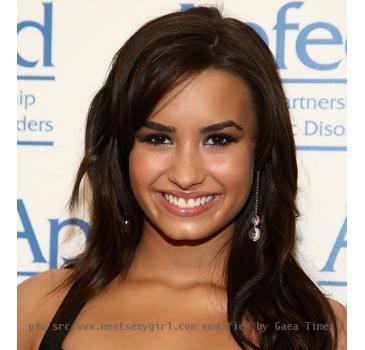 LOS ANGELES (GaeaTimes.com)- Just after a day the “Camp Rock” star Demi Lovato announced on Twitter that she is engaged, the media outlets have come up with new updates that the 18 year old singer has deleted her Twitter account once again! Demi Lovato, however, later made sure to clear things up by saying that she is not engaged but was just joking with her fans. However, a reputed media source reported that the beautiful singer has apparently deleted her Twitter account as if someone tries to visit her profile now, it shows that the profile does not exist.

Demi Lovato previously wrote on Twitter that she is engaged with one of her fans. The singer also posted one of her photographs with her fan who was seen kneeling down and proposing to the singer and actress. However, later she wrote that she is not engaged but was just joking with her fans. Demi Lovato has not announced officially that she has quit Twitter but a reputed media source reported that when the user is searching for her tag-name “@ddlovato”, its yielding a message from Twitter which says that the page does not “exist” anymore. However, the gossip sources are of the opinion that the account might have been hacked as well.

All the aficionados of Demi Lovato are scrambling on web to see latest update about her Twitter account. However, there is no confirmation of the new yet. Demi Lovato is presently in Lima, Peruv where she performed with Jonas Brothers. Her fans have reportedly asked her about her Twitter account in Facebook as well but the singer has not replied to any of the comments.