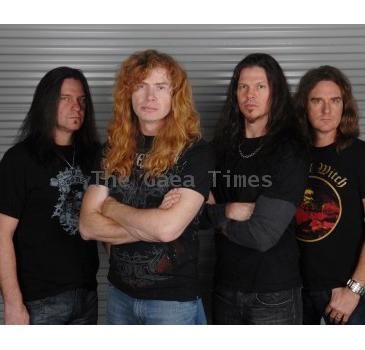 September 18, 2010 (Sampurn Wire): In the month of March this year, Ol Drake of UK thrashers ‘Evile’ had declared that if his band wins a coveted Metal Hammer Golden Gods award, they would do a bungee jump while dressed as cowboys.

However, Ol perhaps said a little more than he could handle. Six months have passed since then and the band has won at a particular category at the Metal Hammer Golden Gods. They are now facing the consequences of their previous statement.

Ol would bungee jump for a charity while donning the attire of a cowboy, but he wouldn’t be alone. He will be accompanied by Alexander Milas, who happens to be the editor of Metal Hammer magazine and has also won the 2009 "PPA Editor of the Year" award.

Ol has admitted that he is looking ahead to jump 170 feet while dressed as a cowboy for this particular charity this Sunday. As this moment draws nearer, Ol Drake told Metal Hammer magazine that he in reality is looking to plummel.

He said that there was a time, recently when he stood at the 15th floor of a hotel balcony and looked down and realized that he wasn’t ready for this. However, another day when he was on a high bridge, he felt confident enough to do the bungee.

NEW YORK - 'Harry Potter and the Deathly Hallows: Part 1', made a grand opening with 330 million dol...

Use of condoms can be justified 'in certain cases', says Pope

LONDON - Breaking with years of Roman Catholic teaching, the Pope has said the use of condoms can be...

'The Chronicles Of Narnia': Third Movie On The Way

LOS ANGELES (GaeaTimes.com)- 'The Chronicles of Narnia' films are an all time favorite with kids...

Have fun shooting some evil bats. All you need to do is to shoot as many bats as possible. But, do n...

NEW DELHI - "Laws should be made, not against quacks but against superstition," it is said, but tra...
Copyright© 2010 The Gaea Times