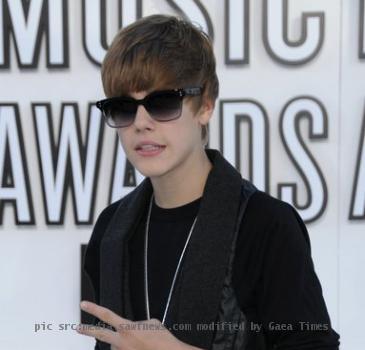 LOS ANGELES (GaeaTimes.com) — Justin Bieber has successfully added a new feather to his cap. The teen pop star wins his first Video Music Award, thanks to his millions of fans, who voted for him.

Before his debut performance at VMA award ceremony, at Nokia Theater, Bieber was introduced by Kim Kardashian. A Bieber Fever started when he sang “U Smile,” “Baby” and “Somebody to Love”. Fans were screaming with the rhythms of the songs and expressing their love and adoration for their idol.

The video clip “Baby” earned Bieber the best video award. The videos that were nominated for VMA awards include, Jason Derlo (”In My Head”), Ke$ha (”Tik Tok”), Nicki Minaj (”Massive Attack”) and Broken Bells (”The Ghost Inside”).

The 16 year old Canadian cutie appeared nervous while accepting the award. Wearing a black jacket and dark sunglasses, he expressed his heart felt gratitude to all his fans for making him their star. He also thanked music industry executives, his big brother and his mentor Usher besides adding “Thank you to everybody here.”

Tags: Baby, Justin bieber, Somebody to Love, U smile