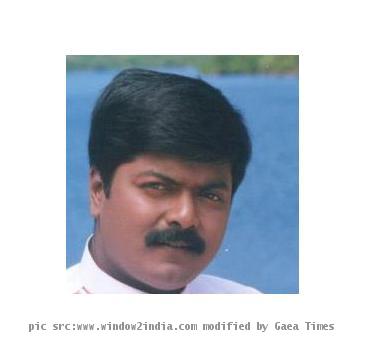 CHENNAI, INDIA (GaeaTimes.com) — Murali, a popular actor of Tamil as well as Kannada movies has died at a Chennai based hospital last night. Murali, 46 was suffering from chest pain and reportedly died of a heart attack.

Murali was rushed to hospital immediately after his condition deteriorated. Unfortunately, the actor didn’t respond to the treatment. His body was taken to his Valsaravakkam residence. The actor is survived by wife Shobha, son Atharva and daughter.

Murali, who acted in almost 100 films, started his career in 1984 with the Tamil film ‘Poovilangu’. He came into lime light after the huge success of ‘Puthu Vasantham’. Other movies that earned him accolades are ‘Idhayam’ , ‘Thanga Manusukkaran’, ‘Alli Thanda Vanam’, ‘En Asai Machan’, ‘Poomani’, ‘Porkaalam’, ‘Sundara Travels’, etc.

Murali was the son of famous Kannada film director Siddalingaia. The actor was last seen in the debut film of his son Atharva: ‘Baana Kaathadi’. His most recent film ‘Kavasam’ is scheduled to release this week.

Tamil Nadu best actor award was given to him in 2001 for his excellent performance in ‘Kadal Pookal’.

Our heartiest condolences goes to Murali’s bereaved family and friends.

CHENNAI - Tamil Nadu might have started the rationalist movement in the country. But when it comes t...

September 21, 2010 (Sampurn Wire): Producers of the Tamil film industry have been getting unique t...

Is A.R. Rahman losing his way in Kollywood?