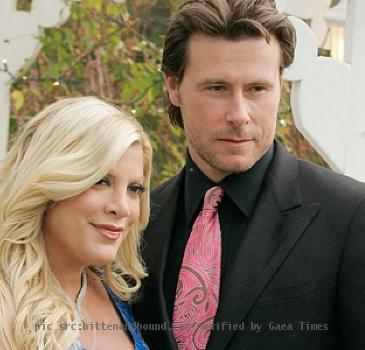 LOS ANGELES (GaeaTimes.com)- Reality TV star Dean McDermott was hospitalized on Tuesday after he suffered a dirt bike accident. Dean McDermott was reportedly out with his friends on dirt bikes during the accident and he has been admitted to a Los Angeles hospital. The injuries include a punctured and collapsed lung. The 43 year old husband of ‘90210′ star Tori Spelling was also injured earlier this year after injuring his shoulder while dirt biking. At that time he had vowed never to indulge in dirt biking again.

Tori Spelling said that she was informed of the incident by his friend. The friend had however said that Dean McDermott was in the ER and getting the X-rays done because he did not want her to panic. She revealed that she was furious at Dean McDermott for going out dirt biking. She said that she broke down after seeing him in the ICU. She added that he apologized to her in that state and said that she and the kids mean everything to him and so he wont do it again. Dean McDermott also tweeted about his accident and thanked the people for their wishes. He added that a punctured lung was painful and he would take time to recover from it. According to his tweet he was not feeling that well on Wednesday and called the second day at the hospital was always the worst.

Dean McDermott and Tori Spelling are part of the reality series ‘Tori and Dean: Home Sweet Hollywood’. The show focuses on the life of the reality stars as they juggle between their careers in Hollywood and their children Liam, 3, and Stella, 2. Tori Spelling was recently in the news after she claimed that all her ‘90210′ co-stars hate her.