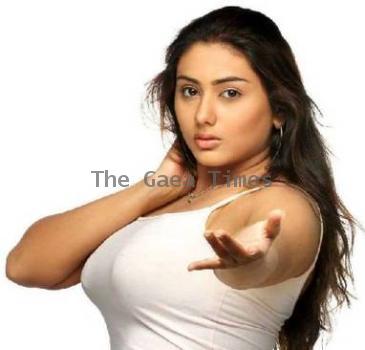 June 23, 2010 (Sampurn Wire): One of the India’s most glamorous babes, Namitha, couldn’t find a perfect reason to rejoice as almost all her previous films had been a debacle at the box office.. But, the actress is now, on top of the world as her recent Telugu release ‘Simha’ has successfully completed 50 Days. The actress, who was in Mumbai for the past couple of months, is now flying back to Hyderabad for the success meet of the ‘Simha’ Team.

In spite of the film having the most happening hotties, Nayanthara and Sneha Ullal, actress Namitha managed to woo the audiences with her oomph. At present, the actress is also excited about her other Telugu film ‘Deshdrohi’ that has her in a substantial role.

Meanwhile, the actress has won laurels for her best performance in the Kannada film ‘Hoo’ that features her along with Meera Jasmine in the female lead. Apart from these films, the actress has mounted more hopes on her upcoming Tamil film Chief Minister Karunanidhi’s ‘Ilaignyan’ starring Pa. Vijay and Ramya Nambeesan in lead roles.

TIRUCHIRAPALLI, INDIA (GaeaTimes.com)- Southern actress Namitha is known to have a huge fan-follo...

July 5, 2010 (Sampurn Wire): Setting everything straight Namitha, the glam-girl of the Kannada mov...

Namitha Shows Her Negative Side

May 24, 2010 (Sampurn Wire): Namitha has showcased her acting skills in almost all film fraterniti...
Copyright© 2010 The Gaea Times