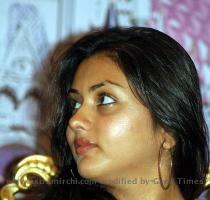 TIRUCHIRAPALLI, INDIA (GaeaTimes.com)- Southern actress Namitha is known to have a huge fan-following with many of her ardent followers never missing an opportunity to get up close and personal with the star. However, one of her fans took a rather extreme step to get close to the much acclaimed actress by attempting to kidnap her. The incident happened on Monday at the Tiruchirapalli airport while Namitha was on her to way to attend a function in Karur, located at a distance of 330 kilometers from Tiruchirapalli.

After landing at the Tiruchirapalli airport as Namitha was waiting for the car which would take her to the function to felicitate former actor SS Rajendran, a man approached her and identified himself as the driver who has sent to fetch her by the organizers of the event. Without suspecting any foul play, the 30-year-old actress boarded the car along with her manager John and the vehicle sped away without any delay. However, actual driver who had been sent by the function organizers witnessed the entire incident and followed the vehicle and soon the abductor’s car was overtaken by him. After being intimated about the incident, the police authorities arrived at the spot and took the man into custody. T

he kidnapper later told the cops that he was just a fan of Namitha and had abducted her to just stay close to her. However, authorities have revealed that the man has been kept under custody as he gave conflicting answers during interrogations. Informations about whether the man has been charged in the case has not been available to the media as yet.