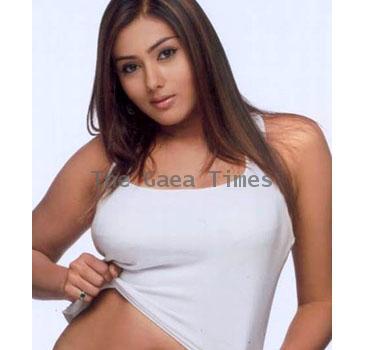 September 30, 2010 (Sampurn Wire): Renowned South Indian actress Namitha, who was last seen in the Kannada film Hoo, is back Kannada films again. She starred opposite Kannada film star V Ravichandran in this film and was a treat to watch but could not become successful at the Box Office.

The next Kannada film of the sensational actress is titled Namitha I Love You. The film will be produced by Raviteja Reddy under the banner of Jayasimha pictures. It has music, dialogues, story and screenplay by M Jayasimha Reddy, who is also the director of the movie.

The shooting for this movie was performed at MS Palya Sambrama College with Namitha. Diwakar is handling the camera in this film, which has Rajesh Brahmawar as the choreographer. The stunts will be handled by Thriller Manju.

TIRUCHIRAPALLI, INDIA (GaeaTimes.com)- Southern actress Namitha is known to have a huge fan-follo...

July 5, 2010 (Sampurn Wire): Setting everything straight Namitha, the glam-girl of the Kannada mov...

Namitha Shows Her Negative Side

May 24, 2010 (Sampurn Wire): Namitha has showcased her acting skills in almost all film fraterniti...
Copyright© 2010 The Gaea Times