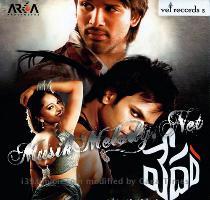 HYDERABAD, INDIA (GaeaTimes.com)- ‘Vedam’, the complex multi-starrer was released today. Director Radhakrishna Jagarlamudi a.k.a Krish has shown great excitement in this new action-drama Telugu venture. The film is produced by Yarlagadda Shobhu and Devineni Prasad. Among notable stars there is Bollywood’s Manoj Bajpai, Allu Arjun and the beautiful Anushka Shetty. Manoj Bajpai was kept as a secret by the producers till the release of Arka entertainment. The plot of the film was kept completely under wraps till the release. During the music release on May 3 Allu Arjun said that it is acomplexfilm that has interwoven stories. He also mentioned an old man who plays an important role in the film.
The cable operator who is one of the important characters is played by Allu Arjun. He is known as ‘Cable Raja’ and represents the lower class. Anushka Shetty plays a prostitute named Saroja and Manoj Manchu plays ‘Vija Chakravarthy’, an upcomingrock-star. The 4th important character comes in the character played by Manoj Bajpai. The action packed drama has all the makings of a super-hit. The promotion for the film was low-key and visible just before the release. It looked like producers were happy with the hype that an Allu Arjun film will automatically generate. They have revealed in a statement that they plan to release the film across Andhra Pradesh and abroad as well wherever there is a sizable Telugu speaking population.

The May 3 music release was quite a success that gave the movie the much needed publicity. the music has been composed by M M Keeravani with lyrics by Sirivennela Seetarama Sastry, Sahiti, E S Murthy and M M Keeravani himself.

September 24, 2010 (Sampurn Wire): It was a couple of months ago when actor Silambarasan mentioned t...

September 20, 2010 (Sampurn Wire): It looks like Tamil film fans will be disappointed for this Diw...

Is Silambarasans Vaanam Based On Hollywood Movie?

Silambarasan Flew To London For Shooting Of Vaanam

August 12, 2010 (Sampurn Wire): Actor Silambarasan has completed the first schedule of Vaanam, which...

"Vaanam" To Be Made By Silambarasan

HYDERABAD, INDIA (GaeaTimes.com)- Actor Silambarasan who was in talks with a number of producers...