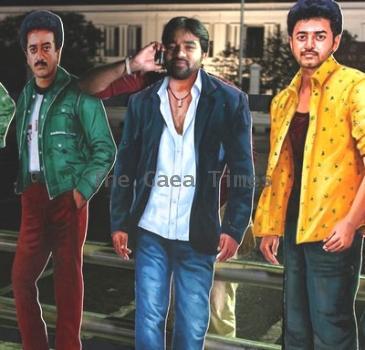 September 20, 2010 (Sampurn Wire): It looks like Tamil film fans will be disappointed for this Diwali as their favorite actors’ films aren’t likely to hit screens for the festive occasion. First it was Vijay’s Kaavalan that was scheduled to hit screens on Diwali and is now postponed to December due to delayed shooting schedules.

Although the filming of Manmadhan Ambu has been done on time, it seems that the post production works would take more than couple of months to be completed. If producers had plans about releasing the film for Diwali, they would have probably commenced post production works by now. With the film’s shooting yet to be completed, it’s sure that the release date would be delayed.

For the moment, couple of romantic entertainers have been confirmed for release, which include Prabhu Deva’s directorial Engeyum Kadhal. The film features Jeyam Ravi and Hansika Motwani in lead roles with Harris Jayaraj scoring music.

The other film will be a multi-starrer film titled Vaanam. Directed by Krish, the film is a remake of Telugu movie Vedam. Silambarasan, Bharath, Anushka, Prakash Raj, Sneha Ullal, Sonia Agarwal and couple of other prominent actors are playing lead roles in this film.

Pushkar-Gayathri’s VA QUARTER CUTTING is likely to join the bandwagon of Diwali releases. This will be an unconventional comedy-thriller with the entire story revolving around three characters during a night.

Global Nair organisation to be launched in Delhi Sunday

NEW DELHI - Global Nair Service Society, an organisation of the Nairs residing outside Kerala, will ...

September 24, 2010 (Sampurn Wire): It was a couple of months ago when actor Silambarasan mentioned t...

September 21, 2010 (Sampurn Wire): Trisha is flying all the way to seventh heaven as the actress has...

September 21, 2010 (Sampurn Wire): Trisha is flying all the way to seventh heaven as the actress h...

Trisha is back in Tollywood

September 20, 2010 (Sampurn Wire): The beautiful southern belle Trisha is a superstar in the Telug...