Is Silambarasans Vaanam Based On Hollywood Movie? 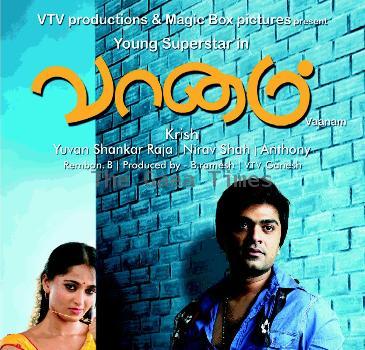 August 16, 2010 (Sampurn Wire): Silambarasan’s previous film Vinnaithaandi Varuvaaya had some traces of Hollywood’s romantic comedy 500 Days of Summer. Of course, the film’s plot was exactly the same where the girl doesn’t believe in love and a guy falls in love with her. In fact, Zooey Deschanel’s characterization of Summer Finn was completely replicated as Jessie.

Well, here’s an interesting buzz about Silambarasan’s upcoming film Vaanam, which is a remake of Telugu movie Vedam. The award winning filmmaker Krish a.k.a Radha Krishna Jagarlamudi (maker of original version) has been signed to remake the film.

Calls on air are that filmmaker Krish was inspired by Hollywood’s Powder Blue and made Telugu movie Vedam, which is now getting remade as Vaanam.

Powder Blue revolves around 4 characters – a suicidal ex-priest, a transsexual sex-worker, head of corporate crime organization advising his servicemen not to seek revenge on ex-workers and a crummy owner of strip club. Their lives are unexpectedly connected on a Christmas-eve.

In all likelihood, Vaanam boasts of similar plot, where 5 characters with their own problems come across each other on the eve of New Year. Simbhu plays the role of a cable operator, who has been chiseling his girlfriend (Sneha Ullal) that he’s a rich guy. Bharath and his girlfriend want to make it big as rock stars while Nayagan fame Saranya enacts the character of a desolated mother, who comes to Chennai for selling her kidney and a Muslim (played by Manoj Bajpayee in Vedam), who has a bitter experience in society. Anushka takes on the role of a sex-worker planning to make her way to Chennai for setting up her own brothel.