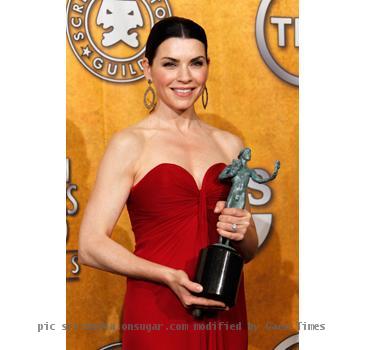 LOS ANGELES (GaeaTimes.com)- Julianna Margulies, while signing the show, “The Good Wife” was the least concerned about the popularity and award prospects of the show. All she loved was its incredible content, and the meaty role that she felt satisfied while portraying. Bagging the SAG Awards yesterday, for the outstanding female performance in a drama, for the same show, was just an icing on the cake.

Julianna Margulies said that she was completely overwhelmed to get the award and was “taken aback”. According to her, last year, the people just related to the show, and this year, it has gone a step further, with more intricate, complex and interesting script, to attract many more audiences. She feels grateful as the show not only made her popular but also made her attain her recognition. However, despite being popular than ever before and ruling the television industry on her own rights, she is still humble like she was in the past. She said that what makes her the most nervous in an award ceremony is walking down the red carpet, in front of so many fans waving and staring at her. Once she is through it, she again gets back to her normal self. She feels that she is an actress, but often her art of acting, negates the art of fashion, and she ends up doing fashion disasters. Nevertheless, in the SAG awards, she was beautifully dressed in her red gown, with no elaborate jewelery, apart from a big hoop that hanged down her ears.

Julianna Margulies‘ year has proved to be quite productive this year, as for the same show, she bagged several other awards like the, Golden Globe Award for Best Actress Television Series Drama, Television Critics Association Award for Individual Achievement in Drama and Screen Actors Guild Award for Outstanding Performance by a Female Actor in a Drama Series.

Press Conference by the President After G20 Meetings in Seoul, Korea

LOS ANGELES, (GaeaTimes.com)- One of the most popular thriller flicks amongst the teenager, "M...

Remarks by the President in a Discussion on Women and the Economy in Seattle, Washington

Clooney Calls On Hollywood To Cast Spotlight On Disaster Victims

GEORGE CLOONEY called on Hollywood to cast its spotlight on the desperate needs of disaster vict...

LOS ANGELES (GaeaTimes.com)- Actress Kyra Sedgwick was honored with an Emmy award in the categor...
Copyright© 2011 The Gaea Times