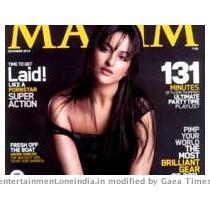 MUMBAI, INDIA (GaeaTimes.com)- “Dabangg” girl Sonakshi Sinha is back with a bang. This time the Bollywood newcomer has been tangled in a new controversy surrounding some hot shots she has given for a magazine in a bold bikini outfit. The news sprang up after a reputed magazine’s website sot up pictures of the actress in a hot and sizzling bikini, posing for Maxim. However, the newbie refuses to accept the news calling it as mere rubbish. Sonakshi says that she is completely shocked by the rumors. The actress says that though she did pose for Maxim but not in a bikini.

Reports from the other media website claims that the bikini shot was supposed to be the original cover page for Maxim and that got later shifted to some other photo. The Maxim magazine cover page shows Sonakshi Sinha in a gorgeous black outfit. However, these pictures are also in no way less bolder than any bikini shot. After the actress was asked on this latest news she refuted it and took the matter on Twitter. Her Twitter blog shows her posting that she was shocked to see something like that coming from India Today, who actually reported of the bikini news.

However, some reports claim that the bikini cover page photo has been photo-shopped or changed but what the actual thing is still not clear. Reports are also surfacing that the change took place after her father Shatrughan Sinha did not approve of it. However, the pictures of Sonakshi in the sizzling green and white stripped bikini appearing on the website have raised quite a good amount of steam. It shows the village belle from “Dabangg” in a complete new glam avatar.