Sonakshi Sinha Bikini Picture for Maxim: Fake or Not? 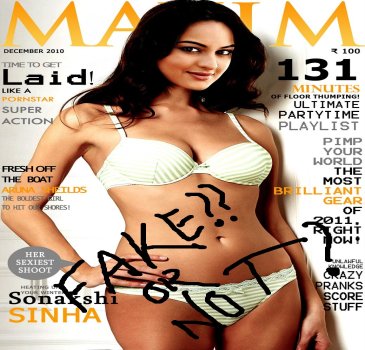 In her Twitter account, Sonakshi had commented that, although she had appeared in Maxim’s photoshoot in a black dress, she did not pose in bikini. Hence, she was shocked when India Today featured an article related to her appearance in bikini for Maxim. She commented that -

These guys generally have their facts and figures right! Got the fact that I’m on Maxim right, but the figure (pun intended) completely wrong! Would’ve been smart if they checked out the magazine before writing whatever they felt like. It’s not about me anymore but about their credibility.

Earlier, Sonakshi Sinha had decleared that she won’t wear any revealing clothes only for publicity’s sake. So when the bikini photo appeared over the internet, it raised a huge interest among her followers. So, now as she is claiming the photo to be a fake, still loads of people are not buying it.

Even if the Sonakshi Sinha’s bikini picture is fake, it has gained her huge popularity just like Yanna Gupta’s panty-less pictures a few days before. With two new films Kick and Joker in her bag and castings opposite to superstars like Salman and Akshay, did she really needed such publicity at all? What do you think? Take a look at the picture and decide yourself whether the picture is fake or not! Do remember to share your views in our comment section.