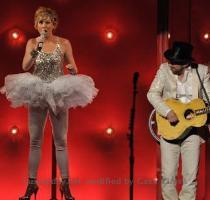 NASHVILLE (GaeaTimes.com)- On Wednesday night, the Sugarland Duo Jennifer Nettles and Kristian Bush won the best Vocal Duo of the Year Award at 44th Annual Country Music Award ceremony. The annual ceremony was held at the Bridgestone Arena in Nashville, Tennessee. Although it is for the fourth time that the duo won the award, they seemed no less excited as they collected the award from Joanna Garcia and NASCAR driver Jeff Gordon. The duo thanked their family and fans for their win and success. Kristian Bush thanked his father by saying “You were right, play guitar.”

Jennifer Nettles and Kristian Bush’s Sugarland have been winning the CMA Top Vocal Duo of the Year Award since 2007. The Duo is one of the most popular country band and has a huge fan following. On Wednesday night after receiving the award, Kristian Bush said that it feels great to find people who admit that they are country music fans. The guitarist said, “People show up every day and say, ‘Man, I love this song. I had no idea I was a country music fan”. An excited Jennifer Nettles held that the 2010 has been a great year for the duo that has seen “growth and expansion creatively”. She added that Sugarland is “super-excited” about the fact that it is being able to bring good country music to its fans.

Apart from taking to the stage to receive the award, Jennifer Nettles and Kristian Bush also crooned their latest hit at the Country Music Award ceremony on Wednesday night. The duo performed their hit number Stuck Like Glue.