Caitlin Burke Solves “Wheel Of Fortune” With One Letter 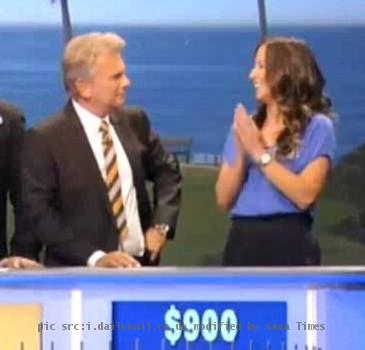 LOS ANGELES (GaeaTimes.com)- American television game show “Wheel of Fortune” watched a contestant for the first time who solved an entire puzzle of 27 letters with only one letter as the clue phrase. Caitlin Burke, 26, a fashion magazine editor in New York seemed to have needed only one letter to solve the puzzle “I’VE GOT A GOOD FEELING ABOUT THIS”. As a reward for her answer, she will be spending holiday in Caribbean and will be able to stay at a spa resort in Granada. She will also get cash $6,500 as a prize.

The host of “Wheel of Fortune”, Pat Jatak said that this was the most “amazing” solve they ever had on the show. In the beginning a fellow contestant said asked for the word “R” on the board of puzzle, however, it was not present in the seven word puzzle. Caitlin Burke said “L” and it appeared as the fourth letter in the fifth word. However, along with the letter another clue was displayed. The clue was there would be an apostrophe in the first word. After seeing the entire puzzle board, Caitlin Burke wasted no time and came up with the correct answer. Just after the answer, the host applauded and congratulated her and the audience applauded in appreciation.

LOS ANGELES (GaeaTimes.com) -- Caitlin Sanchez is the 14 year old girl who used to deliver her v...
Copyright© 2010 The Gaea Times