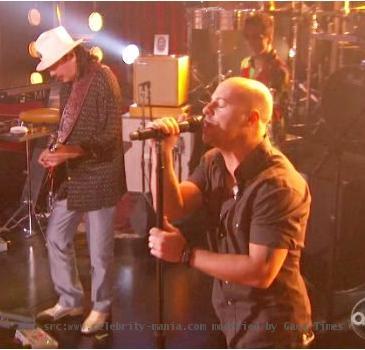 LOS ANGELES (GaeaTimes.com) — Dancing With the Star Season 11 is back on ABC with 12 new celeb contestants. While one of them will be voted off tonight, the duet performance of Chris Daughtry and Carlos Santana will be cherished for a long time by the audience of Dancing With Star.

Chris Daughtry, the finalist of American Idol set the stage ablaze with his “September” performance. On the other hand, Santana performed “Oye Como Va” and “While My Guitar Gently Weeps” with guest singer India Arie.

Then the duo took the stage and captivated the audience by performing “Photograph,” the 1983 hit by British rock band Def Leppard.

Although Daughtry and Santana’s performance was not as beautiful as the original one, they still managed to give a rocking rendition.

Did you like the duet performance of Chris Daughtry and Carlos Santana? Do share your views with us.