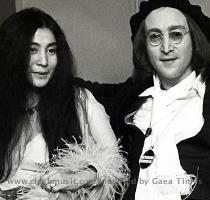 DAKOTA, (GaeaTimes.com)- John Lennon’s demise, after being shot four times at his back, might have parted his soul from his body, but it could not part the late singer from the people heart. Had he been alive, he would have turned seventy today on his birthday.

John Lennon’s Dakota home in the Upper West Side of Manhattan, became an infamous place in the city, after the singer was shot dead in front of his house. But on his birthday, hundreds of his fans have gathered in front of the building, with candles and flowers to give a tribute to the singer. This house, where he lived, has been decorated with flowers, drapes and light to commemorate the birthday of the late singer. Some of his fans say, that the singer may have gone, but he still resides in the people’s heart through his music.

That is the reason why EMI Music has decided to pay a tribute to the singer by reviving some of his songs, both unfinished and the popular once. This project was a brain child of Yoko Ono, his wife. She said, that she was asked to attend various birthday celebrations around the globe. However, since it was not possible for her to travel to 200 cities in one day, she decided to give a treat to all his husband’s fans, in her own way. A new version of his album, “Double Fantasy Stripped Down,” will be released soon. The album consists of songs that portrays John Lennon as a family man.

Steve McCardell, decided to create a global anthem to celebrate John Lennon’s birthday. The anthem, “We are the people of the world”, projects some of the ideals that John Lennon had endorsed. Global peace, equality for the people, human brotherhood, charity are some of the elements of this anthem.