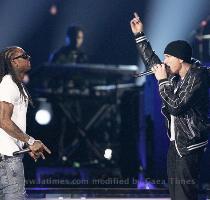 LOS ANGELES (GaeaTimes.com)- Hip-Hop fans all over the world have a lot to rejoice as two of the biggest names were seen in the new video that aired on MTV on September 30. The video called ‘No Love‘ features Eminem and Lil Wayne. The single is from Eminem’s latest album ‘Recovery’ which has already hit double platinum since its release.

Both Eminem and Lil Wayne have had their share of controversy over the years and with Lil Wayne presently serving time in prison the video has generated and even bigger hype. In the ‘No Love‘ video, Lil Wayne appears first and raps from inside a smoky room. A school kid with a black eye is shown next and gradually the story unfolds. The kid is shown bullied by the bigger boys in the first half of the video. Eminem joins Lil Wayne in the smoky room and is also seen rapping from inside the studio. The school kid is also shown to a fan of the rap stars with their posters stuck on his walls. It is shown that after being knocked around by the bullies, the young kid gets inspiration from his idols and toughens up.

Towards the end of the ‘No Love‘ video, the kid is shown fighting back against the bullies and finally feeling proud of himself. Like most tracks in the ‘Recovery’ album, Eminem gives out a positive message about resistance and courage in the song. His last video which had Megan Fox in it, dealt with domestic violence and also featured Megan Fox.