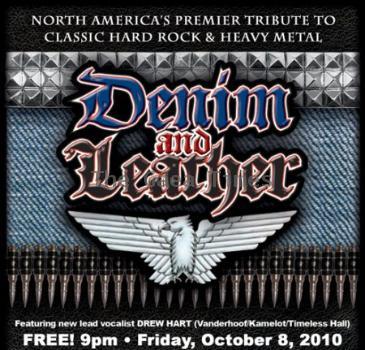 September 2, 2010 (Sampurn Wire): ‘Denim And Leather’ happens to be a tribute to the genres of classic hard rock and heavy metal and they have announced that vocalist Drew Hart (formerly of bands like ‘Vanderhoof’, ‘Kamelot’ and ‘Timeless Hall’), drummer Zak Nilsson (son of iconic singer and songwriter Harry Nilsson) and guitarist Nate McCaslin (from ‘Aura Surreal’) have been added to the group’s ranks. Jeff Baker (from ‘Kings Chamber’ and Aggressor) on bass and Jeremy Varao (‘Mercykill’) on guitar and vocals complete the line up.

‘Denim And Leather’s former members included awesome and iconic musicians from bands as ‘Leatherwolf’, ‘Lizzy Borden’, ‘Metal Church’, ‘Malice’ and ‘Helstar’. The former members were also from bands like ‘Seven Witches’ and ‘Flotsam And Jetsam’. Some of the ex members still make an appearance with the band and one of them is lead vocalist Ronny Munroe who has had experience in singing for bands like ‘Metal Church’, ‘Presto Ballet’, and ‘Lillian Axe’. He also plays with ‘Denim And Leather’ as a guest.

‘Denim And Leather’s current line up will play its first string of shows on Friday, the 8th October at Tailspin in Las Vegas and on the next day at the Firehouse in St. George. The band is also recording songs and is gearing up for a CD release.