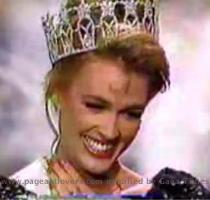 DENTON (GaeaTimes.com)- Perhaps never would have one imagined that a former Miss USA will enter a shop and end up stealing items that worth as meager as $90. A north Texan beauty queen, Shannon Marketic who was crowned Miss USA back in 1992 was arrested recently after a shop owner complained that the lady had tried to leave a Target store in Denton without paying for some of the items she had collected. She was charged for shoplifting and was freed on Tuesday on a $500 bond.

The police have mentioned that the lady was caught shop lifting items that were worth $87. A security officer at the Target store located on Loop 388 mentioned to media sources that Shannon Marketic tried to walk away with a jar of Olay Professional PRoX Skin Treatment and some baby products and items. However, Shannon Marketic on her part has denied the charges and maintained that the items rolled into the cart and landed underneath her purse. She added that it happened mistakenly as she was busy speaking on her phone.

However, this is not for the first time that Shannon Marketic had hit the headlines of tabloid newspapers or been of topic of discussion over the internet. The 38-year-old former beauty pageant winner had a brush with law back in 2007 when she was arrested at DFW airport for public intoxication. The lady at that time had told officers that she thought she was in a Washington D.C airport. In 1997, she made headlines when she filed lawsuit against the Sultan of Brunei and the royal family. Shannon Marketic alleged that the family had held her as a sex slave. The case was not heard by the federal court.