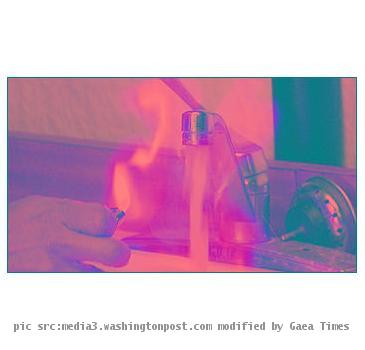 LOS ANGELES (GaeaTimes.com)- On the wake of the British petroleum Oil Leak that has been spewing gallon of oil per day and has been termed by many as the greatest environmental disaster that the country has faced till date, the HBO on Monday went on to broadcast Josh Fox’s documentary “Gasland” that focuses on the natural gas drilling that has been going on in the whole country and how the disaster of it is going unnoticed. The documentary “Gasland” once again brought in front of the viewers that horrific tale of people and animals who have been living in the dungeon where the corporate natural gas drilling companies do not mind letting toxic chemicals and oil loose in the environment making life miserable and horrific.

In “Gasland” Josh Fox explores the extent of harm that the natural gas drilling is doing to states like Pennsylvanian, Texas and many others all over United States. “Gasland” reveals the vast natural gas reserve that lay deep underground in the region spanning from Northeast Pennsylvanian down to the south Texas and even in the Western states. According to Josh Fox with the 2005 Energy Act exempting the natural gas drilling from the laws of federal water safety, the corporate sector has gone on to explore this area of natural gas reserve. Since then many companies have indulged in tapping natural gas out of the land by the process if hydraulic fracturing.

Being a native of the Wayne County in northwest Pennsylvania, Josh Fox’s “Gasland” is a product of an inquisitive mind that started the whole business of natural gas drilling after receiving an unsolicited offer of nearly $100,000 from a company that wanted drilling right in the family’s land. However “Gasland” on Monday brought in front of the viewers the looming unnoticed horror.