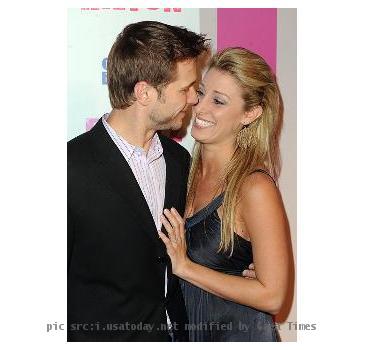 LOS ANGELES (GaeaTimes.com)- The fourteenth season of the dating reality show on ABC ‘The Bachelor: On The Wings Of Love’ seemed to have concluded with a fairytale ending with the handsome commercial pilot, Jake Pavelka expressing his love to the blonde beauty, Vienna Girardi. However, just three months after the almost too perfect to be true climax, the two love birds have parted ways. The apparently great love story seems to have gone wrong somewhere as Jake Pavelka and 24 year old Vienna Girardi have called off their engagement.

The news that the 32 year old commercial pilot from Texas has split from Vienna Girardi was initially brought to light by a leading news source and it was later validated when a statement was released by a representative of the couple. Although it has been confirmed that couple have called off their engagement, any information bout the reasons which led to the split has not been forthcoming as yet. In an interview to a news source, the 24 year old divorcee from Florida had revealed that they were thinking of getting married to Jake Pavelka in a summer wedding later this year in a beach or island ceremony.

Despite the fact that many viewers were not really happy with Jake Pavelka when he chose Vienna Girardi at the end of the latest season of “The Bachelor,” the news of the couple splitting just months after their love blossomed on the reality show, was something that they were surely not expecting at least so soon. It had been reported earlier that Jake Pavelka continued to be in touch with his former girlfriend even after being engaged to Vienna Girardi.

LONDON - Hollywood actors Anne Hathaway and Jake Gyllenhaal have stripped for a magazine cover and g...

LONDON - Anne Hathaway and Jake Gyllenhaal, who star in the upcoming comedy 'Love and Other Drugs',...

LONDON - Actor Jake Gyllenhaal likes to "protect" his co-stars during sex scenes in movies so that t...

Jake Gyllenhaal feels 'sex is all about releasing tension'

NEW YORK - Jake Gyllenhaal, who will be seen with Anne Hathaway in an upcoming flick, thinks 'sex...

LONDON - Jake Gyllenhaal has revealed that he tried to 'protect' Anne Hathaway while they filmed a r...

LOS ANGELES - Singer Taylor Swift says she suffers from "relationship phobia", which leads her to du...
Copyright© 2010 The Gaea Times