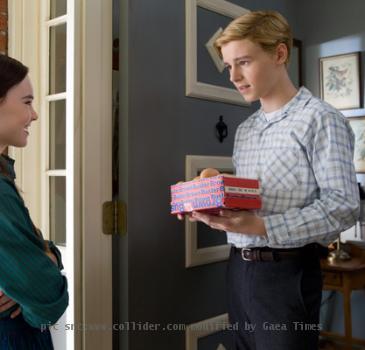 LOS ANGELES (GaeaTimes.com)- Rob Reiner’s latest movie “Flipped” will hit the theaters on August 6, the director said in an interview. The online trailers of the film has received all positive appreciations and this anticipated sweet love tale is based on Wendelin Van Draanen’s novel by the same name. However the script is co-written by Rob Reiner and Andrew Scheinman. The recent online trailer of the movie has produced great expectations among Rob Reiner fans and the screenplay is etched out in such a way that the audience will not be disappointed it seems.

Rob Reiner in his recent online interview spoke about his movie and gave his audience some ideas and background about his forthcoming film. The teen age tale of love and romance has a huge star cast the story is about two young students who are always opposing each other but ultimately falls in love. The movie is going to be an entertainment with lot of interesting twists and turns in it which the young generation will surely like. “Flipped” stars Callan McAuliffe, Madeline Carole in the role of protagonists, the other casts include Kevin Weisman, Shane harper, Micheal Bolten, Anthony Edwards, Rebecca De Morney and John Mahoney.

Rob Reiner who enriched Hollywood with his movies like “When Harry Met Sally”, “This Is Snipal Tap”, “The Sure Thing”, “Stand By Me”, “Misery” and many others has made his movie a through entertainment and the unique story telling method of Rob Reiner is always appreciated by his fans. The film “Flipped” is an adaption of Castle Rock Entertainment and Warner Bros. Pictures and this movie will surely please the viewers.

GHAZIABAD - A bride was robbed of gold ornaments and cash worth over Rs.2.80 lakh while she was goin...

LONDON - Patients suffering from AIDS in South Africa are unable to get right quantities of their li...

CHANDIGARH - The senior manager of a nationalised bank was robbed of his car and mobile by gun-wield...

WASHINGTON - A new research has found a mysterious link between the bones of ancient lizards found ...

Punjab, railways to tie up for building bridges

CHANDIGARH - The railway ministry has decided to sign a memorandum of understanding (MoU) with Punja...

Obama's 'Of Thee I Sing' book a hit among Brooklyn youth

NEW YORK - US President Barack Obama's first children book 'Of Thee I Sing' has proven to be qui...
Copyright© 2010 The Gaea Times