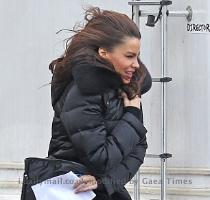 LOS ANGELES (GaeaTimes.com)- Recently actress Sofia Vergara was framed by the paparazzi without any kind of make-up and the best part to it is that the actress still looks beautiful without it. Until now, whenever, fans got a glimpse of the actress, it had always been either on the television set or on the red carpet where she has always charmed everyone with her killer looks. However, on Tuesday as she made her way for the shooting of her new flick “New Year’s Eve” without a dot of make-up on her face, she still looked gorgeous.

The Colombian beauty without make-up could be seen having an artificial fringe attached to her dark beautiful tresses, as she hurried towards the make-up trailer in the cold weather. Sofia Vergara could be seen clutching the script in her hand going through some last minute rehearsals as she geared herself for the filming of her scenes for the movie with actor Russell Peters. The two after shooting their scenes infront of the Brooklyn Museum were spotted laughing and fooling, with the actress pretending to kick the funny-man.

The 38-year-old “Modern Family” star who at present is shooting for “New Year’s Eve” a sequel of “Valentine’s Day” with her recent without make-up news can surely other actresses a run for their money. The up-coming movie meanwhile has already become the buzz of the Hollywood circle. Hopefully it will attain success with the audience, for the star casting in this flick is certainly eye-catching. Along with Sofia Vergara and Russell Peters, the movie also includes Ashton Kutcher, Robert De Niro, Katherine Heigl, Lea Michele, Josh Duhamel, Hillary Swank, Jessica Biel, Zac Efron and Michelle Pfeiffer. According to reports, the movie is slated to release in December 2011.

Fever keeps Ash away from Delhi promotions for 'Guzaarish'

WASHINGTON - 'Modern Family' star Rico Rodriguez has admitted that he had a crush on actress Sofi...
Copyright© 2011 The Gaea Times