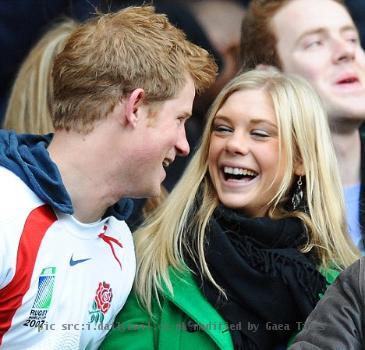 LONDON, UNITED KINGDOM (GaeaTimes.com)- After Prince William dominated the headlines for his much-hyped wedding to longtime girlfriend Kate Middleton which is slated to be held later this year, now its time for his younger brother Prince Harry to hog the limelight owing to his love life. If recent reports are anything to go by, then the 26-year-old British prince is supposedly attempting to give his romance with Chelsy Davy a new lease of life as the former love-birds were seen leaving a London nightclub hurriedly during the early hours of Sunday morning in a Jaguar to avoid public glare.

According to a source close to Prince Harry, the British prince is head over heels in love with 25-year-old Chelsy Davy and despite any circumstances, it would not be surprising if the third in line to the British throne goes back to the Zimbabwe-born beauty. “Harry says his time with Chelsy is always the happiest,” the insider further went on to add. At the same time, an insider have also revealed that Prince Harry has also invited his former lady love to his brother’s April wedding to Kate Middleton, although any official confirmation in this regard has not been available as yet.

Chelsy Davy, who recently finished her law studies, came to Great Britain last Friday and met her former beau the next day. On Saturday, the former couple went to the Beaufort House private members’ club where they were joined by a group of friends before the pair left the nightclub and moved off in a Jaguar in a rather secretive manner.

"Move To The Groove" Creates Buzz

LOS ANGELES, (GaeaTimes.com)- The creators of the special dance program, "Move To The Groove", got...

LONDON - Prince Harry was dumped by Chelsy Davy after he asked her to share him with other girls. Ch...

LONDON - It seems Prince Harry has moved on from his split with Chelsy Davy. The royal has found a...

LONDON - Prince Harry's ex Chelsy Davy seems to have quickly moved on from her split with the roya...

LONDON - Prince Harry hasn't spoken to on-off girlfriend Chelsy Davy since they had an intense long-...
Copyright© 2011 The Gaea Times