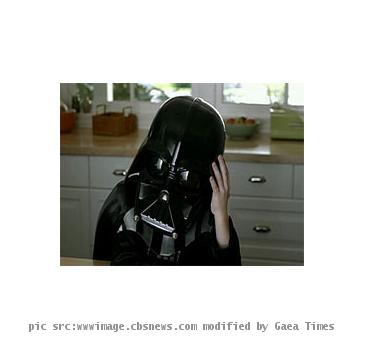 LOS ANGELES (GaeaTimes.com) Darth Vader Commercial has, reportedly, received maximum attention from the viewers owing to its wonderful direction and interesting way of story telling. The commercial was titled as “The Force” and in no time it has become one of the most watched videos of You-Tube. If reports are to be believed, the Darth Vader commercial attracted about 16 million viewers from all over the world. A six year old boy, Max Page starred in the Volkswagen commercial, in which he appeared in full Darth Vader attire.

In the Darth Vader commercial, Max Page attempts to use his force on everything, from his household staffs to the family dog as well. Max Page appeared on one of the reputed talk shows on Monday along with his mother where he said that he has never seen “Star Wars”. On the other hand, the audience was shocked to hear that her son suffers from heart problems. In her interview, Jennifer Page said that Max Page had his first heart surgery when he was only three months old and after a week, the doctors installed pacemaker as well. Jennifer Page also added that Max Page goes to hospital still now for routine check up. However, in the end, she said that her son is her “real inspiration”.

Tim Ellis, vice president for marketing of Volkswagen of America said that Max Page took the directions attentively and as the crew were filming, the former could feel that the Darth Vader commercial is going to be iconic. Even Jennifer Page said that the whole family is thrilled by seeing such “overwhelming” response. She said that it was Max Page’s first national commercial.

LONDON - It is the dream application for anyone harbouring fantasies of being Luke Skywalker in "Sta...

LONDON - A rare Darth Vader costume from 'Star Wars' film 'The Empire Strikes Back' is going on s...

LOS ANGELES (GaeaTimes.com) -- The problem with Theater which have an outstanding first act is t...

George Lucas to release Star Wars in 3D from 2012

LONDON - Inspired by the phenomenal success of 'Avatar', director George Lucas has decided to releas...

LOS ANGELES (GaeaTimes.com) -- The problem with Theater which have an outstanding first act is t...

Mich. police arrest 'Darth Vader' robbery suspect after he put on his mask in range of camera