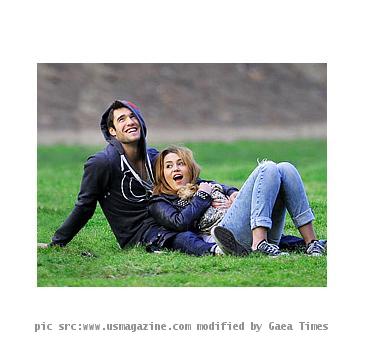 However, Miley Cyrus said that she was just sitting with Josh Bowman at the park and talking. The “Hannah Montana” fame said that they are good friends and the British actor “takes really good care” of her dog. A source close to the couple, on condition of anonymity said that they are dating and its “legit”. The picture that surfaced on web shows that Miley Cyrus and her reported beau sitting at the park, enjoying their time with each other. In one photograph, Miley Cyrus is seen holding her puppy as she sat between Josh Bowman’s legs. The actor is seen kissing the “”I Thought I Lost You” singer in the photograph. Moreover, the photograph clearly shows that the duo are really not friends as they claim to be.

Miley Cyrus and Josh Bowman net each other on the set of “So Undercover” and they, reportedly, finished shooting the movie last month. Moreover, a source close to the movie said that the couple seemed “inseparable” at the wrap up party of their film. Though the couple deny their affair with each other, the British actor, reportedly, spent time with Miley Cyrus in Los Angeles, during one of the breaks from filming. Josh Bowman previously dated Amy Winehouse and Miley Cyrus dated Liam Hemsworth.