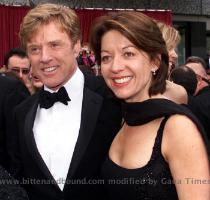 LOS ANGELES (GaeaTimes.com)- Robert Redford is not someone who generally known to shun away from the paparazzi. However, this time the actor was recently seen making some confessions about his life as he spoke about his wife and other family members. The ace film personality said that his wife of two years Sibylle Szaggars has come across as a blessing for him. From what the actor said of Sibylle Szaggars it was clear that he has found his happiness in his younger wife.

Robert Redford had a series of unfortunate events in his life with the death of his infant son and the passing away of his first wife Lola van Wagenen. He even witnessed the early death of his own mother when he was a teenager. However, the crisis now seems to have taken a back seat with wife Sibylle Szaggars encouraging Robert Redford to be more enthusiastic. Robert Redford himself confessed that these days he is taking a lot more interest in activities like horse riding, skiing and playing tennis.