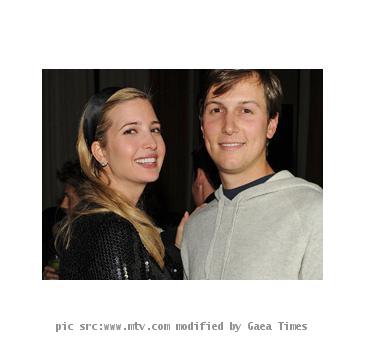 LOS ANGELES (GaeaTimes.com)- Welcoming a baby in the family is always a matter of joy. If it is the first baby, the excitement is all the more. Ivanka Trump, daughter of the business tycoon Donald Trump, is expecting her first baby with hubby Jared Kushner. She revealed the news of her pregnancy through Twitter, on Friday. She said that for sometime she had been waiting to give the good news to all her fans across the globe, and that the time has come to share the good news with the world, declaring that she is pregnant.

Ivanka Trump’s husband, Jared Kushner is the publisher of a leading newspaper of the place. According to the reports of a leading magazine the two tied the knot in October 2009 in a lavish ceremony at, the Trump National Golf Club in Bedminster, in New Jersey, which was attended by 500 guests. Just before the couple got married in 2009, Ivanka Trump insisted that she was not ready to take on the role of a parent due to her and her then-soon-to-be husband’s demanding careers. However, she also said that when their time comes to have a family around, she would give in, and that is exactly what she did within one and a half years of her marriage.

Ivanka Trump’s dad, Donald Trump, said that he knew that his daughter and Jared Kushner would make lovely parents, since they are a wonderful couple. He also said that he is very happy for both of them. Ivanka Trump has also stirred up few hints regarding how she plans to take on the role of a mother, and cited that her enterprising parents has always remained an inspiration to her.

Socialite IVANKA TRUMP is set to make her acting debut on the upcoming season of hit U.S. drama GOSS...

Bondholders, The Donald approved as owners of 3 Trump casinos in Atlantic City

Investors, Donald OK'd as owners of Trump casinosATLANTIC CITY, N.J. â The name on the casinos ...

New owners approved for 3 Trump casinos in ACATLANTIC CITY, N.J. â The name on the casinos is s...

Survival of the fittest: Market pressures could thin the herd of Atlantic City's 11 casinos

NEW YORK - Businesswoman Ivanka Trump's accused stalker has revealed that he is over her and th...