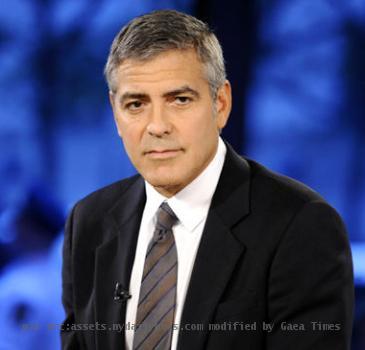 LOS ANGELES (GaeaTimes.com)- Hollywood star George Clooney had been suffering from malaria after a recent trip to Sudan but now has recuperated from the disease, a representative of the actor divulged on Thursday. Publicist Stan Rosenfield further revealed that this is George Clooney’s second bout with the mosquito-borne disease and the actor is now completely cured. The actor who made an appearance on Piers Morgan’s CNN show recently confirmed that he was indeed down with malaria after his last trip to the African nation just about a week ago.

In the episode that is scheduled to be aired on Friday night, the ‘Ocean’s Eleven’ actor talks at lengths about his health condition as well as his work in Sudan to raise awareness about the human rights violation that are being committed at the Sudanese region of Darfur. The news that George Clooney has contracted malaria was first reported after talk show host Piers Morgan took to Twitter to reveal the actor’s recent illness. The publicist of the ‘Michael Clayton’ star than confirmed the news that the actor is now completely fine and has fully recovered from his bout with malaria. George Clooney further adds, that fact that he was completely cured from malaria shows how proper treatment and medication can help to turn “the most lethal condition in Africa” to a “a bad 10 days instead of a death sentence.”

George Clooney who is known for the association with the United Nations in supporting human rights in the trouble-torn African nation, is the latest celebrity to contract malaria. Cheryl Cole had to be admitted to a medical facility after contracting the disease during a visit to Tanzania.

SYDNEY - Australian off-spinner Jason Krejza has quashed speculation that it was because he had f...