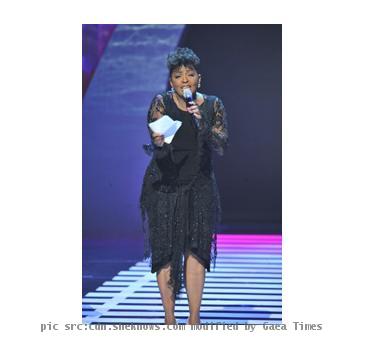 LOS ANGELES (GaeaTimes.com)- The Soul Train Music Awards on November 10 saw a shower of R&B and soul music celebrities gracing the event with anticipation to win the prestigious award. The Soul Music Awards organization paid tribute to American R&B and soul singer-songwriter Anita Baker for her extraordinary contribution to the music industry for 27 years. Anita Baker won Legend Award at the award ceremony along with Ron Isley. The show was aired on BET and Centric network on November 28 and the audience watched their favorite R&B and soul singer perform on stage.

Terrence Howard and Taraji P. Henson hosted the show for the second time and they kept the audience riveted to their seats and provided ample entertainment with their witty remarks. The singers of the R&B industry paid tribute to the legendary singer Anita Baker and sang all her classic songs. The cast included Goapele, Lalah Hathaway, Chrisette Michele, Dionne Farris, Kem, Faith Evans, El DeBarge and Tamia. It seemed Anita Baker was touched by all the performances and when she took the stage to receive her award she said that the real honor for her was that the renowned musicians were paying tribute to her through their performance. Referring to her album “Rapture”, Anita Baker said that she feels “amazing” as the young generation still listen to her album and appreciates it.

Anita Baker is one of the renowned figures of R&B and soul singing industry with two gold albums, four platinum albums and eight Grammy awards to her credit. Ne-Yo and Erykah Badu also performed some hits to entertain the audience. About the event Terrence Howard, the host of the show told a reputed media source that it reminds him of the advancement of black people over the years.

MALDA/MURSHIDABAD - A phone call from her grandson Biswajit was the last time that Ashalata Halder h...

MALDA/MURSHIDABAD - A phone call from Biswajit Halder was the last time that Ashalata Halder got to ...

P. Lal's demise marks end of an era in publishing

NEW DELHI - Every year at the Kolkata Book Fair, a gaggle of literary eager-beavers scouting for a d...

MUMBAI - New laws should be brought in to address the constraints of the Comptroller and Auditor Gen...

WASHINGTON - A new study has revealed that one in three people associates the brand identity of No...

LUCKNOW - The decomposed bodies of three young women were recovered from fields in a village in Utta...