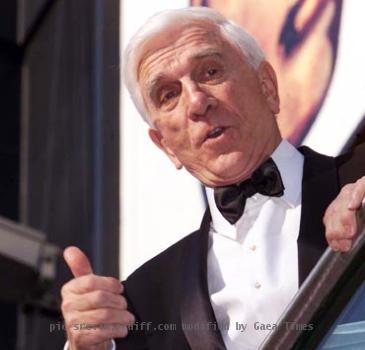 FORT LAUDERDALE (GaeaTimes.com)- The Hollywood stars and all other celebrities of entertainment industry expressed their condolence and paid tribute to Leslie Nielsen after his death. Leslie Nielsen died at a hospital in Fort Lauderdale, Florida on Sunday with his friends and wife by his side, his nephew Doug Nielsen told a reputed media source. The actor was 84 year old and his family said that they would announce the funeral dates shortly.

Leslie Nielsen acted in about 100 films and his films which brought him to spotlight were “The Naked Gun” series, “Airplane!”, “The Poseidon Adventure” and the “Scary Movie” series. Brent Butt, who performed with Leslie Nielsen in 2005 at the Saskatchewan Centennial Celebration said that the actor was a “pro” in acting. However, Bren Butt said that he thinks what he would miss most about Leslie Nielsen is nice and generous nature. Ryan Seacrest, American radio personality and television personality also remembered Leslie Nielsen and wrote on the home page of his social networking site that “Airplane!” is one of his favorite comedies.

Regular exercise 'keeps dementia and other diseases at bay'

WASHINGTON - A new study has suggested that regular exercise could reduce the risk of developing a...

WASHINGTON - A new study has suggested that young mice separated from their mums for longer period...

MUMBAI - Legendary singer Asha Bhosle has been roped in as the goodwill ambassador for the upcoming ...

Remarks by the President at DNC "Moving America Forward" Rally in Chicago, Illinois

Anti-piracy initiatives to be recognised at Music Awards

MUMBAI - A unique Best Anti-Piracy Initiative award will be given at the Chevrolet Global Indian Mus...

Action 'needed to save archaeological sites threatened by rising seas'