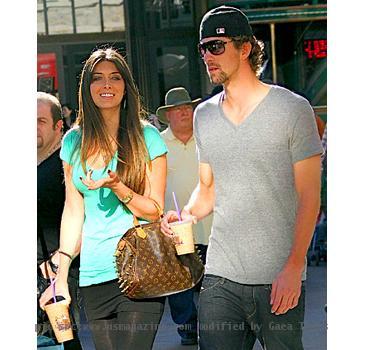 LOS ANGELES (GaeaTimes.com)- It seems that Olympic medalist Michael Phelps has come up with a new catch in the dating scenario. Model turned reality star Brittny Gastineau is reportedly the new lady in the renowned swimmer’s life after multiple reports have suggested that the rather unlikely pair are involved in a romantic relationship. In the past week, the pair have been seen together in a number of occasions enjoying each other’s company to the fullest. The rumors about the alleged affair of the Olympic gold medal winner and Brittny Gastineau was fueled after a source supposedly close to the 28-year-old socialite claimed that their relationship has just started while adding that the rumored-to-be couple look really cute together.

The reports that Brittny Gastineau is romantically involved with the 25-year-old star swimmer was triggered after the pair was spotted together at Los Angeles’ Mondrian Hotel on Friday night where they laughed and talked the night away, the source added. The rumors gained momentum after they next day, the pair was seen shopping together at The Grove before picking up drinks from the Coffee Bean and Tea Leaf. Meanwhile, while talking to a reputed news source at the 8th Annual Orange Balls in Beverly Hills, although Brittny Gastineau did not confirm her relationship with the noted swimmer, she added that he was indeed very cute.

Whether Brittny Gastineau and Michael Phelps are indeed seeing each other continues to remain a subject of much speculations as neither the reality star nor her alleged beau have validated the rumors. However, if the rumors indeed turn out to be true, fans of the pair would surely agree that they indeed make a very cute couple.

Brittny Gastineau and a female companion shopping at The Grove. Los Angeles, USA....

Reality TV mum LISA GASTINEAU has undergone cosmetic surgery to rebuild her nose, after doctors were...

Reality TV mum LISA GASTINAEU has been diagnosed with skin cancer. The socialite's daughter and Gas...

Lisa Gastineauout shopping with her daughter at the 'Under G's Lingerie' boutique in Beverly ...