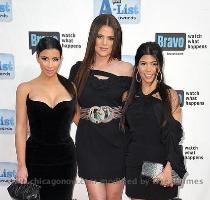 NEW YORK CITY (GaeaTimes.com)- The Kardashian sisters opened their third Dash boutique in America at New York City and the event was marked by a gala opening party for the store. The event was attended by the who’s-who of the city and also several people from the entertainment industry. The sister trio of Kourtney, Khloe and Kim Kardashian sizzled the party in their black outfits and it was the 30 year old Kim Kardashian who grabbed the maximum eye-balls. The Armenian bombshell was dressed in a figure hugging black dress that highlighted her ample curves.

The three sisters who were seen in the latest reality series ‘Kourtney and Kim Take New York’ are getting their new store ready. At the start of the season the sisters were seen hunting for the perfect location for their fashionable and elite store. In the last few episodes the three were busy preparing for the big opening night. The sisters presently co-own two other Dash boutiques in Miami and Los Angeles.

The three sisters were seen all excited before the launch of their third Dash boutique and all three took to Twitter to share their excitement with the fans. Khloe Kardashian tweeted ‘Dash NY here we come!!!!!!’ and sister Kourtney Kardashian exclaimed on the SNS, ‘Tonight’s the night’. Kim Kardashian on the other hand took to Twitter to urge her fans to visit the store and said that she found it unbelievable that they had managed to open another Dash store. The Kardashian sisters have set an example for other young reality stars by making perfect use of the reality fame through their enterprise.