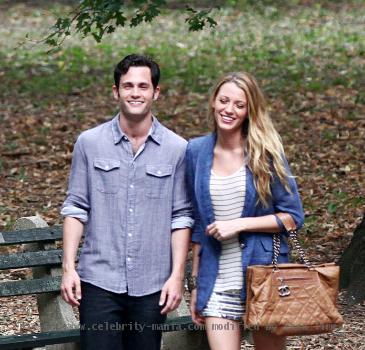 LOS ANGELES (GaeaTimes.com)- Of all the depressing news about break up in this month, it seems that “Gossip Girl” actors Blake Lively and Penn Badgley seemed to have gone through the most amicable separation, the media outlets claim. One of the most attractive couples of Hollywood have called it quits after three years of dating. However, it seems that the couple do not hold any bitter feelings towards each other as Blake Lively reportedly gave Penn Badgley, a birthday cake on the set of their teen drama “Gossip Girl”.

Penn Badgley celebrated his 23th Birthday yesterday with his cast members of “Gossip Girl” and a source close to the actor said that Penn Badgley was touched by the sweet gesture of Blake Lively. An eyewitness reportedly told a reputed media source that Blake Lively made a birthday cake for Penn Badgley and gifted him on his birthday on the sets. The source also said that even though the couple broke up, they are still friends on the set. Even the journalists spotted them together and smiling with each other in between their takes.

Penn Badgley reportedly showed the birthday cake to the photographers. Jessica Szohr, their co-actress on “Gossip Girl” said that the estranged couple remain friendly and she feels that nothing much has changed between them. The photographs published on web showed that Blake Lively looked her fashionable self in her grey pea-coat and leggings. Penn Badgley was wearing a navy blue wool coat. Blake Lively even hugged Penn Badgley and congratulated him for his birthday. The couple started dating on 2007 when they met each other on set. However, they reportedly broke up because Blake Lively expressed her desire to get married and have children.