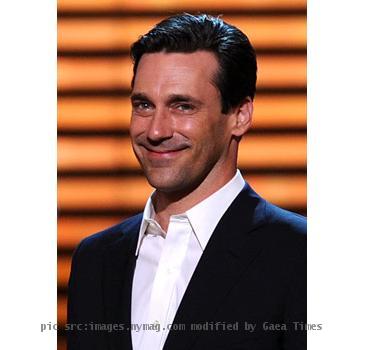 LOS ANGELES (GaeaTimes.com)- ‘Mad Men’ star Jon Hamm appeared on ‘SNL’ last night and similar to his previous appearances on the show, the episode was packed with his signature goofy humor and hilarious jokes. Also appearing in the Halloween special was R&B star Rihanna who did a hilarious segment apart from her fantastic performance.

The first Jon Hamm segment included him talking about the commercials and also a funny monologue where he is heard calling himself ‘Hammer’ as part of pep talk. He also said that he was too influenced by his role in ‘Mad Men’ and thought about the punchlines for commercials all the time. He said that he could come up with some interesting punchlines for almost any product. He gave a hilarious example of a punchlines for diapers. In another hilarious segment the actor also pleaded his case for a viral video that shows him crying. In another segment, the actor played the role of John F Kennedy and was assisted by the SNL regular Fred Armisen. Considering that this was his third appearance, the actor was at ease when it came to donning a new avatar for each segment.

In his final segment, Jon Hamm was seen getting into a rather hilarious fight with Wiig with whom he also appeared in the previous segment as her husband. Rihanna performed ‘Only Girl’ and ‘What’s my name’ on the show and also appeared in one of the segments that was thoroughly enjoyed by the viewers. Dressed as bank robber with a fake gun, the ‘Run This Town’ star looked gorgeous in the fake gangster clothes.