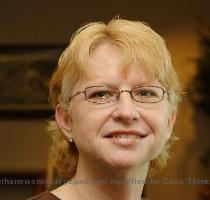 LOS ANGELES (GaeaTimes.com) — Lisa Blount, the eminent Hollywood actress and Oscar-winning filmmaker was found dead in her home in Little Rock, Ark, by her mother. She died at 53.

It is assumed that Blount died Monday, said Pulaski County Coroner Garland Camper. No sign of foul play is reported yet.

Blount, in her career won many awards as an actress as well as filmmaker. Her role as the best friend of Debra Winger’s character in “An Officer and a Gentleman” earned her Golden Globe nomination. She also got accolades for “Prince of Darkness” and “Great Balls of Fire!”

As a producer, Blount bagged the Academy Awards in 2002 as the movie “The Accountant” received the award for best live-action short film. Her husband Roy McKinnon also received the same award as director and star of the movie.

Blount’s recent venture includes filming the pilot for FX’s “Outlaw Country.”
We at Gaeatimes, express our sincere condolences to the bereaved family of Lisa Blount.