Nile and Melechesh to tour Europe 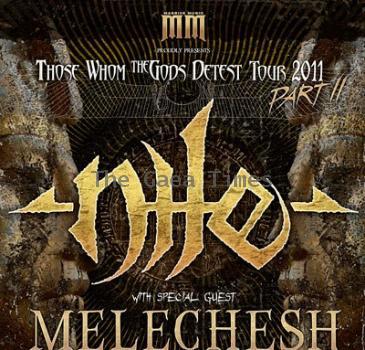 September 21, 2010 (Sampurn Wire): Extreme technical death metal band Nile, hailing from South Carolina, will soon embark on the European leg for the "Those Whom The Gods Detest Tour 2011 - Part II" in the month of January next year.

The black metal band from Jerusalem, Melechesh will be supporting Nile throughout the tour. The tour would cover United Kingdom, Eastern Europe, Scandinavia and the Baltic States. There would be a few extra gigs in, Austria, Italy, Poland, Germany the Netherlands, Belgium, France and even Switzerland. Details about cities and dates would be announced later.

"Those Whom The Gods Detest", sold 3,500 copies in the United States in its debut week of release. It ranked at No. 160 on The Billboard 200 chart. The CD also landed at the 3rd position on the Top New Artist Albums chart. Nile have always been known all over for their extremely brutal and at the same time technically sound music and the new album keeps that status alive.

Neil Kernon who has previously worked with Metal stalwarts like Nevermore, Cannibal Corpse and Queensryche, has produced and mixed the album. The drum-recording job has been taken care by Hate Eternal frontman Erik Rutan. This album is touted as the strongest production from the band yet.

WASHINGTON - Egyptian archaeologists have discovered an ancient road lined with sphinxes in Lux...

CAIRO - Archaeologists have discovered a hieroglyphic engraving in Saudi Arabia, which suggests that...

RIYADH - Saudi archaeologists have found a rock bearing an ancient hieroglyphic inscription of an Eg...

NEW DELHI - India and Sudan on Saturday expressed their desire to expand their cooperation in th...

LONDON - Arsenal reached the quarter-finals of the Carling Cup Wednesday with a 4-0 win over Newcast...

Even turtles and wasps need a little play time

WASHINGTON - Watching kids and dogs play is not an alien sight. However, what about a turtle or even...

CAIRO - A 4,500-year-old tomb of a priest was discovered close to Egypt's Giza Pyramids, Xinhua repo...
Copyright© 2010 The Gaea Times