Newly Weds Ranvir And Konkona To Be Seen In Jackpot! 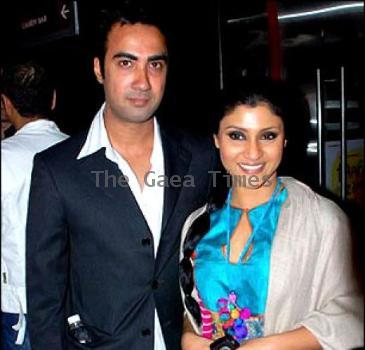 September 14, 2010 (Sampurn Wire): Bollywood actors Ranvir Shorey and Konkona Sen, who tied the knot in a secret event recently, are going to be paired again on screen in a new movie, which is tentatively titled Jackpot.

The couple has earlier worked together in the movies like Aaja Nachle, Traffic Signal and Mixed Doubles. The new movie is supposed to be a romantic thriller, which will be directed by debutant Amitabh Varma, who wrote the popular number ‘Alvida’ of movie Life In A Metro.

Konkona and Ranvir have proved their individual acting talents in different kind of films. Both of them have acted mainly in off beat films and have earned appreciation for their performances.

They have always kept their relationship a private affair and never discussed it in public. Their marriage on September 3rd was also a private affair, which was held in a secret ceremony with close friends and relatives. They even kept it a secret from the industry people and it was later disclosed by the couple in the micro- blogging site Twitter. Only a number of Bollywood actors like Fardeen Khan and Shilpa Shetty were present at their wedding ceremony that took place at their Goregoan residence.

The couple got engaged in 2008 and the two were reportedly living together for the last two years.

WASHINGTON - Tel Aviv University researchers have developed a new method to look at how fat cells ...

Blast of sound can speed up wound healing

LONDON - An ultrasound device that fires sound waves into chronic wounds like leg ulcers can acceler...

LONDON - Purdue University scientists have found the gene that is responsible for the production of ...