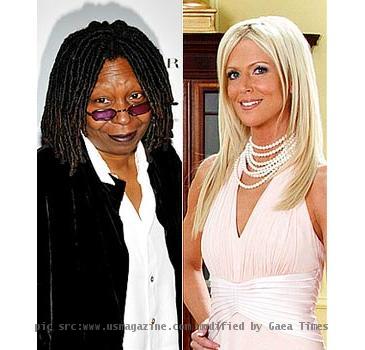 LOS ANGELES (GaeaTimes.com)- Michaele Salahi, who is best known for gatecrashing a White House party last fall along with her husband Tareq Salahi, made an appearance in the popular ABC chat show “The View” earlier this week. However, according to reports, things took a rather drastic turn after the show ended as the reality star indulged in a verbal tussle with Whoopi Goldberg, who is one of the hosts of the hit program. Michaele Salahi appeared on “The View” on Wednesday to promote her brand new reality series on Bravo, “Real Housewives of D.C” when the incident is said to have taken place.

During the show, Michaele Salahi was involved in a conversation with hosts Joy Behar and Sherri Shepard when Whoopi Goldberg came from behind, touched her arm to get her attention and asked her to talk about the night when she gatecrashed the state dinner organized by President Barack Obama last fall. While revealing details of the incident, Whoopi Goldberg told “The View‘ audience on Thursday that Michaele Salahi was supposedly very upset about what was said about her on the show.

After the show, it was claimed that Whoopi Goldberg went to the extent of hitting the White House gatecrasher but the reports were vehemently refuted by “The View” presenter. Nevertheless, Whoopi Goldberg admitted that she had indeed used certain “choice words” with the reality star later when she confronted her about the allegations but added that she was anything but apologetic about it. The Salahi couple became infamous when they made their way into President Barack Obama’s state dinner. Although the couple insist they were invited for the White House party, the case still remains under probe.