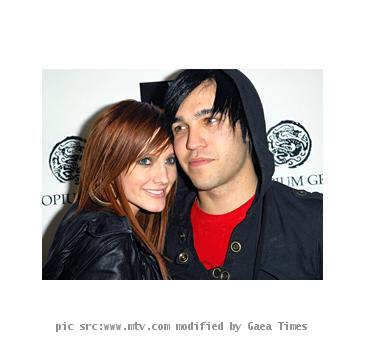 LOS ANGELES (GaeaTimes.com)- Pop singer Ashlee Simpson shocked all her fans recently when it was announced that she was splitting from her husband of two and a half years Pete Wentz. Although the details about the cause of the split continues to remain sketchy, insiders have hinted that it was the Fall Out Boy rocker’s erratic behavior that ultimately paved the way for the couple’s separation. The rock star couple is said to have filed for divorce at Los Angeles County Superior Court citing ‘irreconcilable differences’ as the main factor that resulted in their split.

The news of Ashlee Simpson’s separation from her musician husband came as a bolt from the blue to the followers of the couple as well as the industry veterans considering the fact that couple never even gave a hint that trouble might be brewing between them. Although the pair have been spotted together recently on numerous occasions, sources close to the celebrity pair have emphasized that both of them have become distant for quite some time now and they have not been on track for months. However, the insiders have claimed that there would not be any drama associated with their split as “It’s very amicable. They’re on very friendly terms and speaking it’s fine,” it has been reported.

Meanwhile, sources say that as of now, the top most priority for Ashlee Simpson and her husband Pete Wentz remains the parenting of their son, Bronx and their two-year-old child’s well-being and care is their prime concern. The 26-year-old pop singer tied the knot with Pete Wentz in May, 2008.

Indian cyclists back on CWG track after 32 years

(Attn Editors: This is the 10th preview discussing India's chances in various disciplines at the Oct...

NEW YORK - Ashlee Simpson-Wentz is apparently working on her fourth album after a two-year break....

WASHINGTON - Singer Jessica Simpson has in a tweet written about how lucky she feels to hav...

WASHINGTON - Jessica Simpson and her boyfriend Eric Johnson recently had an affectionate date in...

Valderrama Is A Hit On Twitter.com